Celtic disposed of Hearts in the blistering heat at Celtic Park, returning to the top of the Scottish Premiership.

A good display on the back of Thursday’s European victory seen Celtic run out comfortable 3-1 winners.  A late saved penalty from Fraser Forster was rebounded in but that’s as far as Hearts disturbed Celtic all day.  There was many professional performances today but we are going to select the three who stood out the most.

Bayo – On his first competitive start at Celtic Park, Bayo had a very tidy performance scoring possibly 2 goals, depending on wether the first goal is awarded to him.  From the replays shown on the big screens at Celtic Park it was difficult to tell.  He ran all day and his laying back to midfielders and moving was great.  A good, long awaited start to his Celtic career and much more to come.

Boli-Bolingoli Mbombo – His best display to date.  He did have some loose passes in the first have but did not let his head go down.  He ran all day causing Hearts major problems. One thing he has shown throughout is his athleticism and that gives him the ability to be solid in the tackle.  If he learns to not dive in and ball watch, he will continue to develop at the right pace.

Callum McGregor – Callum ran the show today.  Neat, tidy and creative.  His passes were crisp and precise every time he sprayed the ball about.. His goal was outstanding and came at a crucial time of the match which put distance between both teams.  He makes the team tick and has to play in centre mid.  Ever consistent as per usual. 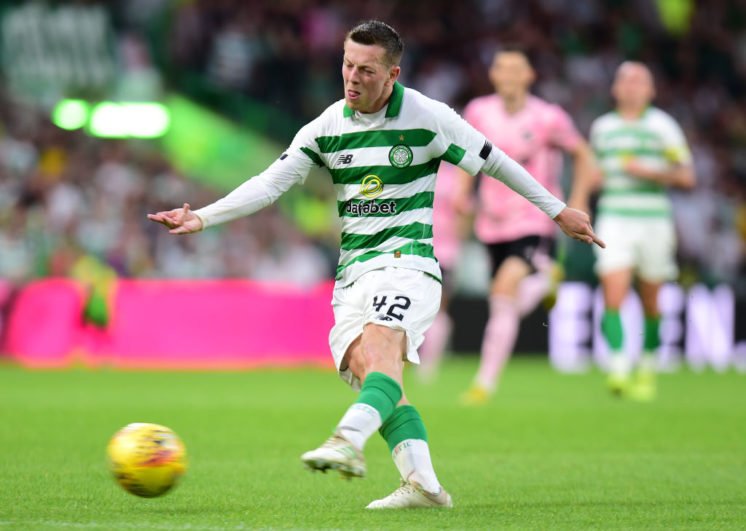