A number of Celtic supporters have praised Leigh Griffiths for another positive performance following the 4-0 win over Motherwell, with many admitting the striker has proven them wrong since the winter break.

Griffiths struggled for form and fitness during the first half of the season, scoring just three goals in 18 appearances in all competitions, whilst also missing nearly two months of action due to hamstring problem (Transfermarkt).

And following the arrival of Patryk Klimala in January (BBC Sport), a number of Celtic fans had urged the 29-year-old to pursue a move away from the club last month.

However, Neil Lennon has reverted to a 3-5-2 formation since returning from the winter break, which has seen Griffiths flourish up top alongside Odsonne Edouard.

The 29-year-old scored his fourth goal in six appearances in all competitions since the start of the year, adding another to his tally against ‘Well on Wednesday (Transfermarkt).

And following the performance, these Celtic fans have praised Griffiths for proving them wrong and forming an partnership with Eddy.

Twitter: Genuinely thought Griffiths was finished at Celtic this time last month and couldn’t have been more wrong. Not only… https://t.co/UCzq12XtXm (@oranstorrie99)

Twitter: @oranstorrie99 You’re not the only one. Glad to be proved wrong though (@karenblair1888)

Twitter: @oranstorrie99 Their link up play is magic at times. So fluent, links up others, creates space (@Pete_cfc)

Twitter: @oranstorrie99 Agree, keep him and Eddie injury free. I actually think we haven’t seen Griffiths at his best yet. Still more to come (@GraemeBhoy1967)

Twitter: @oranstorrie99 The duo we didn’t know we needed (@liambryson76)

Have you been surprised by Griffiths' return to form this year? 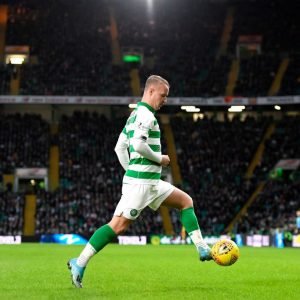 Twitter: @oranstorrie99 A 2020 hungry Griff with a huge point of prove is more dangerous than the 40goal Griff that played under Delia 5years ago (@DHollywoodtheb1)