Christopher Jullien’s performance against FC Copenhagen on Thursday has been praised by a number of Celtic supporters following his Tweet about the match.

The centre-back produced another excellent display at the back alongside Kristoffer Ajer, as Neil Lennon reverted to a back four in the Danish capital.

Odsonne Edouard gave Celtic the lead just prior to the 15 minute mark with a delightfully deft chip over the onrushing Karl-Johan Johnsson, who had denied him twice in the opening five minutes of the game.

The Hoops dominated the opening 45 minutes and it looked as though they were on their way for a 10th straight victory in all competitions.

However, the home side started the second-half well and were on level terms just six minutes after the restart, when Dame N’Doye finished well from inside the area.

Fraser Forster saved a penalty with 15 minutes remaining and neither side could find a winner.

Jullien praised Forster in his Tweet about the match on Friday, and these Celtic fans also lauded the Frenchman’s performance on social media.

Were you impressed by Jullien's performance vs Copenhagen? 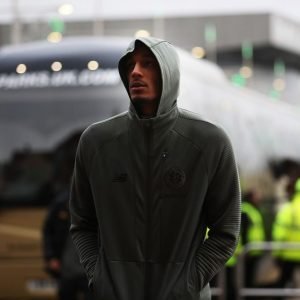 Twitter: @Chri6ViF You were brilliant last night bigman. You took a few sore yins, but still battled through, we appreciated it. (@shamrockbhoy7)

Twitter: @Chri6ViF You were outstanding big chap…get the nose swelling down and we crack on and finish the job in Paradise🍀🍀🍀🍀 (@chrisbhoy77)