Callum McGregor was seen smiling from ear to ear in the Number 7 restaurant in a post-match interview upload to Twitter by @PaulDykes, as the presenter made a comment about Rangers’ result against St Johnstone.

CalMac captained the side to another important win in the push for a ninth consecutive league title, as the Hoops came from a goal behind to register another three points.

Eamonn Brophy opened the scoring for the away side, coolly dispatching his penalty past Fraser Forster.

However, two goals in quick succession from Kristoffer Ajer and Odsonne Edouard completed a first-half turnaround at Celtic Park.

Leigh Griffiths then made sure of the points after half-time, as Celtic extended their lead at the top to 12 points, with Rangers drawing 2-2 against St Johnstone.

After his Man of the Match performance against Killie, McGregor made an appearances in the Number 7 restaurant at Celtic Park.

As he was being introduced, the presenter revealed the win had increased Celtic’s lead at the top of the table and CalMac couldn’t contain his joy, in a video uploaded to Twitter by  ‘A Celtic State of Mind’ podcaster Paul Dykes.

Were you impressed by CalMac's performance vs Killie? 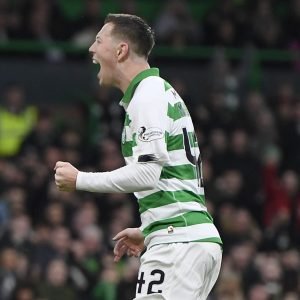 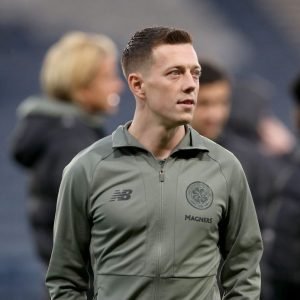 Twitter: 🍀 A CELTIC STATE OF MIND
⭐️ Man of the Match
🏆 Celtic 3 Kilmarnock 1