Celtic dropped more points in the Scottish Premiership on Saturday with a draw against Hibernian.

The Hoops drew 2-2 at Easter Road, and many fans were quick to slam manager Neil Lennon and club captain Scott Brown during the league encounter.

The midfielder gave away a penalty early in the second half after fouling forward Martin Boyle.

Scott Bain saved Kevin Nisbet’s spot-kick, however, Jamie Murphy followed up to give the hosts the lead.

Nisbet made up for his miss from 12 yards to double Hibs’ lead, with Brown eventually being replaced for Shane Duffy with 20 minutes remaining.

Odsonne Edouard pulled a goal back for the Hoops with a penalty, with left-back Diego Laxalt levelling the scores late on.

These Celtic fans hit out at Brown and Lennon during the fixture, with some even wanting the pair out and one supporter labelling Brown as ‘utter rubbish’.

Twitter: Chase Lennon and send Brown with him, that today is unforgivable (@Seaneeee01)

Twitter: Brown and Lennon both ruining their legacies at Celtic by overstaying their welcome. Both absolutely finished (@CFCDan_)

Twitter: That should be the end of Brown and Lennon at Celtic (@Paddy7_)

Twitter: lennon and brown out my club won’t tell you again (@Greig_67) 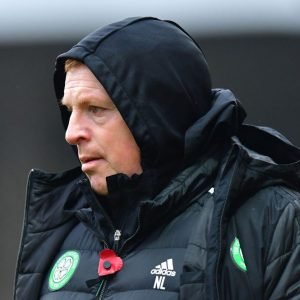 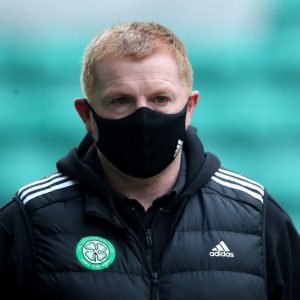 The result sees Celtic move eight points behind rivals Rangers, however, that lead could stretch to 11 if Steven Gerrard’s side beat Aberdeen on Sunday.