Many believed Neil Lennon was on the brink as Celtic boss following the club’s 2-0 defeat to Ross County on Sunday.

Goals late in each half from Ross Stewart and Alex Iacovitti stunned the Hoops and ended their run of 35 cup victories in a row.

Plenty of fans turned up at Parkhead after the defeat to voice their frustrations at the Northern Irishman, and the latest update regarding the manager hasn’t gone down well with supporters on social media.

Sky Sports reporter Anthony Joseph confirmed on Monday evening that the Lennon still has the backing from the club’s hierarchy.

Joseph suggested that further “positive” Zoom calls were held, with Lennon training and will prepare the team for the trip to AC Milan.

Lennon has guided Celtic to just two wins in 10, with the club shipping 23 goals in those fixtures. [BBC]

Joseph shared the news on Twitter and it didn’t take long for these Celtic fans to have their say, with one describing the decision as ‘astonishing’.

Twitter: @AnthonyRJoseph Absolutely incredible decision and will be costly (@StivWilliams87)

Just how bad do we need to get before they wake up? (@Barrhead_Bhoy67)

Twitter: @AnthonyRJoseph The only reason he hasn’t been sacked is that they cannot find anyone to replace him. Lennon, Lawwe… https://t.co/c1lTJVDg9o (@johnnywatt)

Should he go before the weekend? 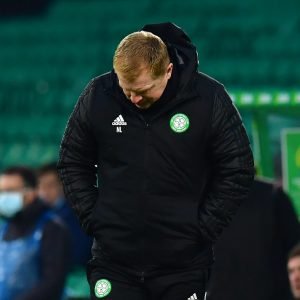 Twitter: @AnthonyRJoseph @edcassidycomedy The biggest season in the last decade is over already, the board are toxic, Lawwel… https://t.co/lfagNEpzeh (@scottw1985)