Celtic fan and sports writer Brian McNally held nothing back as he slammed the club’s performance in their 2-0 Scottish Cup exit against Rangers.

The acquiescence against Celtic’s arch-rivals has left the Hoops with a trophy-less season for the first time since 2010, and McNally summed up the dour mood surrounding the defeat with a heat-of-the-moment comment on the club’s approach.

McNally urged his side to ‘throw caution to the wind’ in the clash, but Celtic ultimately failed to tarnish the clean sheet that Rangers managed to hold onto.

Talismanic striker Odsonne Edouard even saw a late penalty saved in a missed opportunity that is emblematic of the wider performance.

Compared to their counterparts, Celtic managed to dominate possession and had both more shots and shots on target – but Rangers’ full-time jubilation paints a picture of a Celtic side that was anything but on top.

Ahead of half-time, McNally took particular aim at the ‘abysmal’ full-back duo of Diego Laxalt and Jonjoe Kenny, the later of which managed to score an own-goal.

Twitter: #Celtic 2-0 down are on the brink of their first trophy-less season since 2010, so Kennedy must now throw caution… https://t.co/5EGJOSYcFs (@McNallyMirror)

Calling for them to be ‘hooked’ at half-time – with Laxalt indeed substituted – the duo were depicted as liabilities.

Indeed, 90Min gave a player rating of just 5/10 and 4/10 for Kenny and Laxalt respectively, a value far lesser than their Rangers counterparts.

Should Laxalt be dropped? 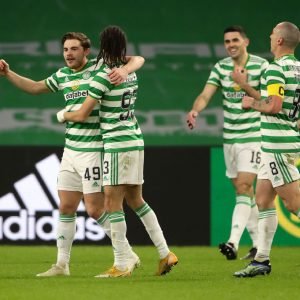 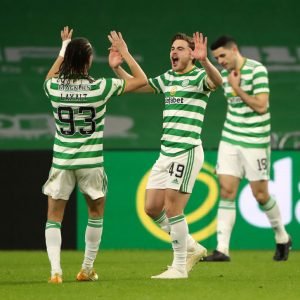 Laxalt appeared to struggle to keep Aribo and Patterson at bay, being spun by the former for Rangers’ opener – and Kenny’s own goal will do little to persuade fans he remains a dependable option.

In that sense, McNally’s comments are a perfect mouthpiece for Celtic fans – it simply was not a convincing showing from a duo with such vital defensive and transitional responsibilities.