Celtic have kicked off Monday morning with a heart-warming nod to new signing Kyogo Furuhashi following the forward’s heroics in the Scottish Premiership.

The forward mustered a hattrick to buoy the Bhoys to an emphatic 6-0 victory over Dundee F.C. in a fine individual display.

The agile attacker was in the right place at the right time to pounce on three free-flowing moves inside the box to ensure victory for the Bhoys.

The club took to Twitter to share footage from CelticTV of a delighted-looking Furuhashi revelling in the stands after being awarded a deserved Man of the Match award.

Furuhashi scored a brace with just five minutes between goals, with a goal from Australian midfielder Tom Rogic sandwiched between his early brace and his hattrick-sealing strike.

Anthony Ralston notched a well-struck fifth goal for Celtic before a late penalty and a Dundee red card for a foul on Liel Abada saw Odsonne Edouard convert from the spot to round off a six-goal thriller for the Celtic faithful.

“It’s not a surprise to me,” manager Postecoglou said of Furuhashi’s display as he spoke to the BBC.

“I knew what I was getting bringing him over. He got the goals and could’ve had a couple more, but his work-rate off the ball was sensational.

“That kind of work-rate and work ethic inspires his team-mates and gains the trust of the players around him.

“There’s definitely more to come from him. He’s literally had three or four training sessions with us.”

Celtic have a new hero off the back of such a convincing performance.

Will Furuhashi continue to star in the Premiership? 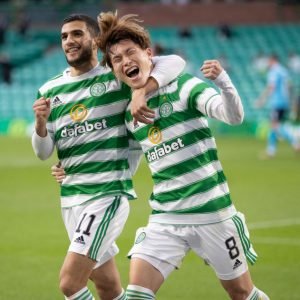 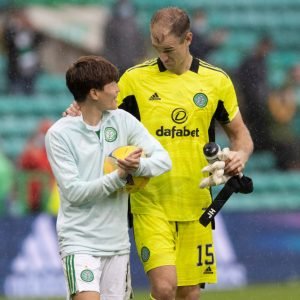 Having already scored in Celtic’s 4-2 Europa League win against FK Jablonec, Furuhashi has taken great strides towards endearing himself to fans.

Expectations will be whetted after such a strong start to life in Celtic colours, and fans will be desperate to see more of the same from the prolific poacher.