Rising UFC star Molly McCann has caught the attention of Celtic fans following a viral social media post on Twitter that flaunted her training in a club shirt.

She took to her official Twitter account, @MeatballMolly, to show off the 2019/20 third kit made by New Balance as she continues to train hard with a view to returning to full contact action in the octagon.

McCann has a 4-3 win-loss record in the UFC but is looking to regain form and fitness.

Followers of the contact sport have noted her excellent performance against South Korean fighter Ji Yeon Kim in her last fight earlier this month in a sign of her recovery.

The Tweet is particularly curious given that she is from Liverpool and has made no secret of her roots as a diehard Everton fan, but that has not stopped the rising UFC fighter from donning Celtic colours.

She also took aim at Rangers fans attacking her in the comments for representing the green and white half of Glasgow, reasserting her Evertonian roots as she hit back at trolling from some of her detractors.

. Imagine rangers fans liking you. Being and EVERTONIAN. And when you wear a Celtic top chat m… https://t.co/gJ6vJlWTdf (@MeatballMolly)

As noted by fan blog 67hailhail, the grey and pink 2019/20 third kit was not one of Celtic’s bestsellers in recent years but looks to have gone down a treat with McCann.

Do you welcome McCann and her support for Celtic? 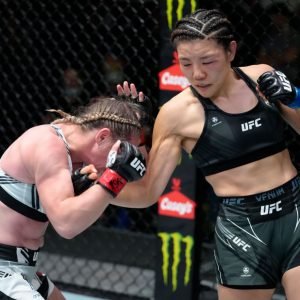 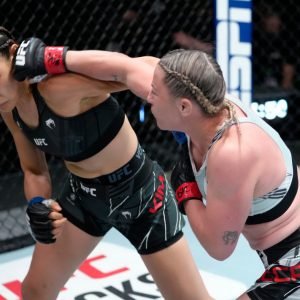 It is hard to discern exactly why she was opting to don the colours of a club she doesn’t support, but Celtic fans will not complain about the exposure.

Her feisty response to Rangers fans is sure to equally add a gleaming smile to ardent fans who have practically seen the Evertonian adopted to the Celtic cause.