Celtic hero Pat Bonner has continued to slam the Hoops’ hitman Albian Ajeti for his failure to regularly be productive in front of goal.

Covering for the then-injured Kyogo Furuhashi, the Switzerland international stepped up with a brace in the SPFL before adding a further goal at a European level, but has since failed to find the back of the net against the likes of Livingston, Raith Rovers, and Dundee United.

He had a small twenty-minute cameo at Pittodrie but again struggled to offer a meaningful goal contribution as his lacklustre spell continued.

Speaking via the BBC Sportsound programme on Sunday, the former Celtic goalkeeper said of Ajeti:

“Whether that was down to a lack of movement or whether that’s not Celtic getting balls into areas he can run onto, it’s incredible a striker for Celtic not touching the ball. I would love to see the stat on it.

Bonner has frequently lambasted Ajeti for his efforts as he has issued similar comments in previous games.

He continued to differentiate between Celtic forwards:

“Again I looked at Ajeti today up front and he’s just a completely different player than Kyogo. There was a couple of times Kyogo was looking for that little pass, that penetrating pass.

“There was one where McGregor got (close) that didn’t happen for him. The next McGregor tried him again. At least he’s threatening the back of centre-halves, whilst Ajeti is going on and just standing in front of them, making it easier for centre-halves.” 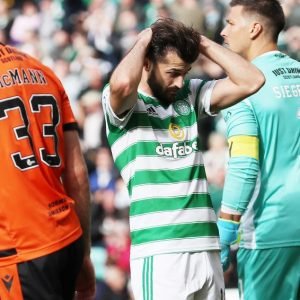 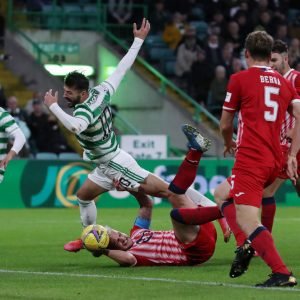 Ajeti has reinforced his peripheral role with his lack of consistency that vastly contrasts with Kyogo.

As a result, whilst by no means impotent, Ajeti will have to settle for second fiddle in green and white for some time yet.