Former Celtic man Davie Provan has claimed that Celtic boss Ange Postecoglou would have felt ‘sick’ after Celtic’s Old Firm defeat due to the close nature of the hotly-contested clash.

A Filip Helander headed effort was enough to sink the hopes of Celtic fans with Rangers running out the 1-0 victors, but Celtic were far from impotent.

The Bhoys dominated possession with over 65% of the ball and had plenty of chances of their own in the game. Provan had previously predicted Rangers to comfortably thrash Celtic but was impressed by the fine margins of the game.

The broadcaster and pundit acknowledged the quick turnaround in terms of the implementation of a new playing style under Ange Postecoglou, even if he equally took time to thrust responsibility for the defeat on the manager.

Writing in his SunSport column, Provan claimed of Postecoglou:

“Postecoglou will have been sick at the result and his own part in it.

“But having matched Rangers on their own patch, he’ll know there’s nothing to fear from Gerrard’s side. Those predicting another 25-point gap should be ignored. This title race will be no gimme for Gers.

“Having tipped them to win the match, I was surprised it was so tight. Given Celts’ problems at the back, I expected Gerrard’s team to win by a couple of goals. With a capacity Ibrox crowd behind them, they had every advantage.

“Instead, only an Edouard sitter, and a good Gers’ set-piece, separated the teams. Given the tough hand he was dealt, Postecoglou has done well to lick Celts into decent shape.

“The embarrassing pursuit of Eddie Howe left him behind the eight ball.”

To dominate possession and to show relative cohesion so swiftly into the season against Celtic’s toughest opponents is certainly to be lauded.

The narrow loss certainly showed encouraging signs, though the defeat nonetheless represents a setback in Celtic’s quest to regain the Premiership title.

Is the squad gelling quicker than you expected? 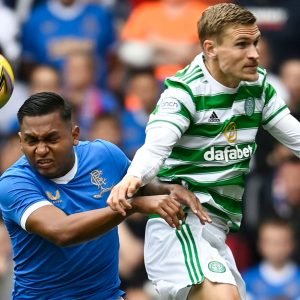 Come January, Celtic will need to pick up form and especially on the road, with Celtic having failed to win an away game since February.

A productive window has also helped Celtic in terms of system-suited signings for Postecoglou, and gelling such a large body of players together is no easy feat.