As the Bhoys secured their first win at Easter Road in years with a 3-1 victory over Hibernian, Brown had his say in Rangers dropping points as the Dons held Rangers to a 2-2 stalemate at Ibrox.

A diving header was met by the former Celtic captain who powered past a bewildered Rangers defence to give Aberdeen a two-goal lead, before mimicking the knee slide celebration of star Rangers striker Alfredo Morelos in from of the Rangers fan.

The sardonic tribute to the Rangers star was well-received by the Celtic faithful, with one fan account taking to social media to share footage of the celebration in bemusement.

Meanwhile, Anthony Ralston, Cameron Carter-Vickers and Kyogo Furuhashi struck in the opening 30 minutes as the Bhoys ran riot at Easter Road to secure another successive away win under Postecoglou.

A late penalty to Rangers ultimately denied Aberdeen all three points, but a combination of results for both sides leaves Celtic just two points shy of Rangers at the apex of the Premiership.

Is Broony a club legend? 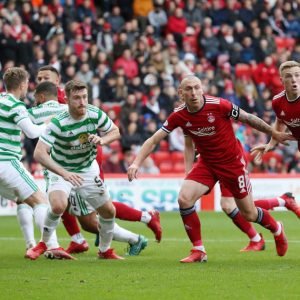 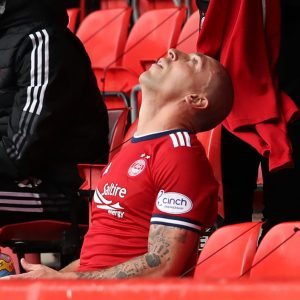 It is a fine testament to progress starting to be built under Ange Postecoglou as his style becomes increasingly second-nature.

Brown will be jubilant to have played his part in helping his former side, and his winding-up of Rangers is trademark of the ex-captain.